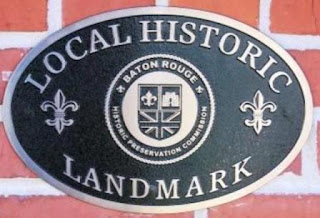 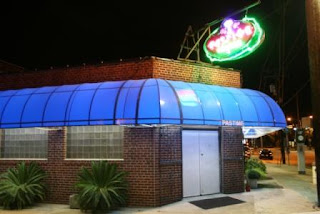 How many years has this building sat on this corner and watched as a city grew around it.
Built and occupied as a grocery store on the corner of a gravel road and a newly paved road stood a rectangular shaped building. Its neighbors on the gravel road was a butcher shop and a few shotgun houses. behind it stood a rice mill, a foundry and a brickyard and on the opposite corner, a fur and trapping supply store. The city wasn't very big in those days and started thinning out just after the cemetary on Florida Blvd. You could still travel way out of town to the airport which is now Independence Park, and later on through the Clover leaf at Florida and Airline. The Broadmoor and Sherwood Forrest areas were truly rural, but all that has changed now. The city has grown east all the way to the Amite River, north into Baker and Zachary, and south all the way to the Assension parish line. And back were it all began, on the edge of Beureguard Town and Catfish Town, sat the red brick grocery that in time would become Baton Rouges Oldest Restaurant.
Can buildings have pain, or know fear? If so, could it feel the march of progress as over half of the building was torn down to make room for a new bridge over the Mississippi River. Thousands and thousands of cars passing over this new bridge every day and none notice the little red brick building or remember its sacrifice. Just another part of standing and watching as the city grows. All its neighbors have gone now, replaced by even more progress. The only reminders that remain is a name on the street between it and the river called Brickyard lane, and the building that once supplied trappers along the river. The area is different, changed, all new, except for the little red brick building.
How many bills were discussed by Legislators during a 3 martini lunch. How many business plans were made, or ideas explored? How many couples had thier first date there, or were proposed to in the Pastime? How many important people, movie stars, celebrities, athletes and political heavy weights have passed through its doors. How many articles, awards and honors has this old building seen in all its years on this corner?
If these walls could talk, what would they say. How many volumes of intresting tales could it tell. Young college students having thier first beer. People losing or winning money on all the Pay-off pinball machines that were in the bar until Grevenburg rolled over them with a bulldozer. How many cabs were called to pick up customers over the last 64 years. Athletes fighting over the same woman. Future politicions hacking the back door with a mechete' when Joe wouldn't open. Movies and commercials being filmed inside and outside. All the game day crowds with thier yelling and screeming and cheering for the Tigers. How many pizzas and poboys has been sold over all these years. What tales could it tell.
Its an old building, with many memories and many contributions to not only the city, but the people in the city, its customers and its visitors. Maybe thats why after all these years, the building has become an Historic Landmark. An honor to an old building who watched a city grow around it. This old building stands a steady watch, a gateway into downtown, a landmark for travelers and a testiment to stability and time.
Posted by Webmaster at 7:34 PM