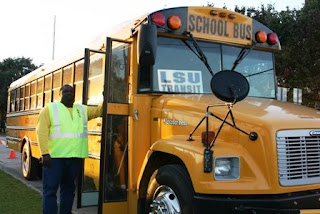 A lot of folks don't really know the history of the Tiger Transit. It is NOT a CATS or Capital Area Transit creation.

It all started around 1989. Several local businesses would hire independent Coaches, and sell bus tickets that included a meal, wine, and sometimes game tickets to each game. It was usually a single coach and only a handful of people could ride. Well, we took that idea, and in keeping with Pastimes informal atmosphere, decided to do the same thing, only different. We hired my Aunt and her big yellow School Bus to bring our customers to the game. It was only 1 bus, but we would pack it down. We only charged $4.00 for a round trip, and gave away beer as well. This went on for many years until insurance problems became an issue. At this time, CATS decided it could do the same thing, with more pick up points throughout the city, and offered Pastime one of those spots. This allowed us to move more customers and because of the availability of parking, the quick transit time to the stadium, and the large amount of regular bus riders established by the Pastime, we fast became the largest stop. Each year, LSU would subsidise CATS version of the Tiger Shuttles, but eventually, that subsidy ran out and CATS discontinued the service. They did this with less than 2 weeks before the first home game so we scrambled to get our service going again. We called a meeting with LSU, BRPD, The Sheriffs Office, LSU police, CATS and all transportation companies at the Pastime. We discussed contraflow, police escorts, parking, reducing routes, etc but in the end, CATS declined to continue the service.

In the corner of the table, sitting quietly, was a man named Keith Washington. After the meeting, he came to me and said, "I can do this, no problem". Mr. Washington is the owner of Baton Rouge Commuter Service and owned several buses with access to several more. From that moment on, Mr Washington and BRCS have ran the Tiger Transit from the Pastime.

Now don't be confused with the attempt by Hotard, which failed, and the present independent shuttles from the Sheraton and the Hilton. City Buses (CATS) were leased, officers were hired for escort, and the buses use contraflow down Nicholson. Hummm, when we suggested that, we were told we could not lease city property, we could not get the proper permits for contraflow, and the police escort would be cost prohibitive. Even though we had the answers, we guess we didn't have the clout. In any event, those buses are similar to the buses of the 90's and ran as an independent service and charge a higher price than the original Pastime Tiger Transit. . In the meantime, we are still busing 4-5 bus loads per game from the Pastime, to Tiger Stadium and back, and do it for only $12.00. All money goes directly to BRCS for payroll, fuel and insurance. The Pastime does not make a single dime off of this service. We provide the Transit as a service to our customers. We do get some benefit's, which are advertising and 4-5 buss loads of customers before and after the game. WIN-WIN-WIN-WIN-WIN situation for all. Win for us. Win for BRCS. Win for the police as it reduces parking and traffic congestion, Win for LSU as we get the fans to the game at no cost to the university or the state, and a Win for the fans as they can eat, drink, watch games, and take a quick ride to the game and not have to worry about driving, parking and walking from the edge of campus. And after the game, they can sit and relax at the Pastime, catch the scores, have a meal and wait for the traffic to die down. I love it when you can keep things simple, and everyone benefits.
Posted by Webmaster at 4:11 PM